HOURS
Open dawn to dusk every day of the year

The Battery hosts more than 20 significant monuments that commemorate communities and key figures in the history of the city and nation. Exploration and immigration, invention and innovation, defense and heroism are major themes. 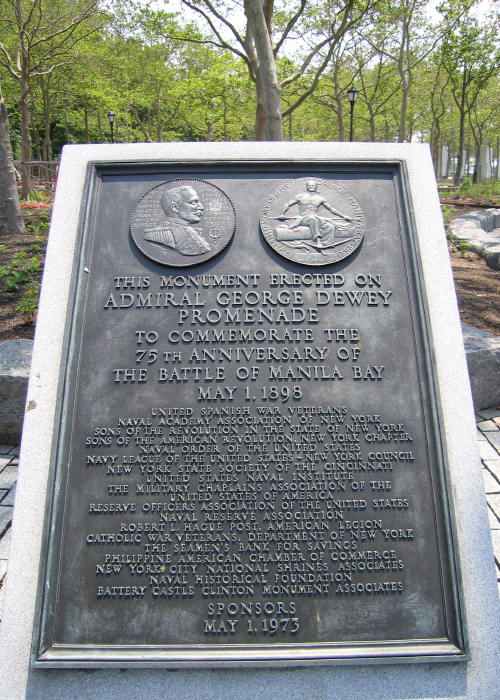 Donated by 18 civic, veterans’, and historical associations, under auspices of American Battle Monuments Commission, The Dewey Memorial commemorates the 75th anniversary of the battle of Manila Bay, fought on May 1, 1898.

Dedicated on October 8th, 1991, this monument depicts a man in the water reaching up to grasp the outstretched hand of one of three merchant mariners on board a lifeboat. Sculptor Marisol Escobar was inspired by a photograph of victims of a World War II submarine attack on an American merchant ship. This monument is dedicated to all merchant mariners who have served America from the Revolutionary War through the present day. 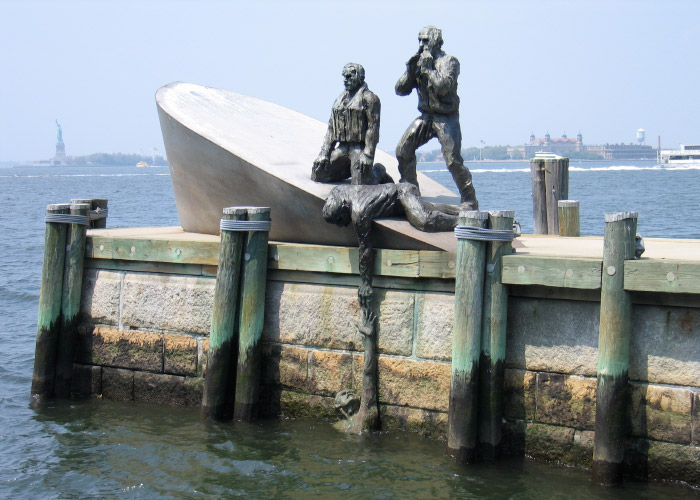 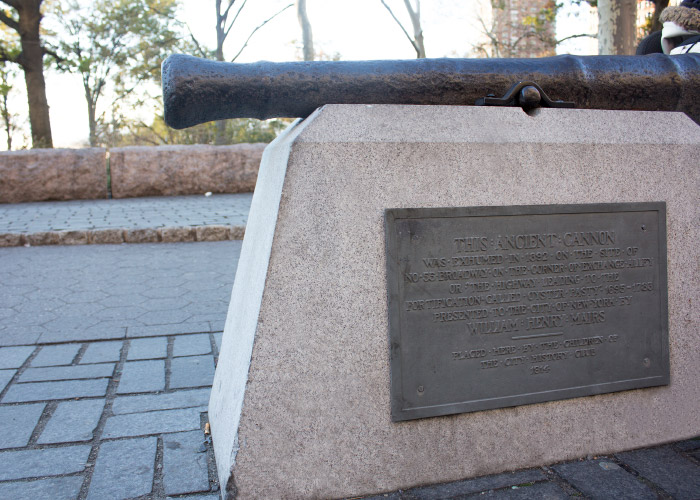 This cannon was exhumed in 1892 from the corner of Broadway and Exchange Alley. Presented to the City of New York by William Henry Mairs, it was placed at The Battery in 1914 by The Children of The City History Club.

Marking the entrance to the New Amsterdam Plein and Pavilion, this impressive sculpture by renowned artist Simon Verity and his partner, architect Martha Finney, provides a glimpse of the evolution of Lower Manhattan. Installed atop a large natural boulder, the monument features a three-dimensional bronze relief of The Castello Plan, a 1660 map of the city of New Amsterdam. All 317 houses extant at that time are delineated on the map, many with the gardens and orchards that supplied food to sustain the first settlement. 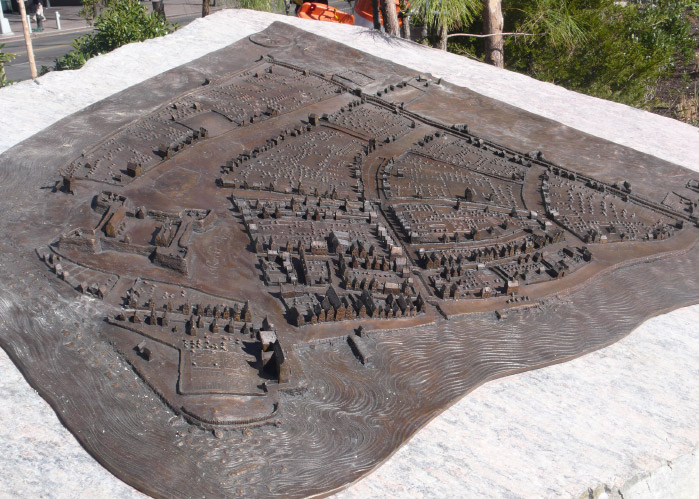 Saved from demolition by a 1946 act of Congress that declared it a National Monument, Castle Clinton is an early accomplishment of New York’s historic preservationists and one of the best examples of adaptive reuse in the United States. Originally built on an artificial island 200 feet off the tip of Manhattan, the West Battery, as it was then known, was part of a system of forts intended to deter attacks from the British during The War of 1812. After the war, it was renamed Castle Clinton, in honor of Mayor Dewitt Clinton, and served as the headquarters of the Third Military District. 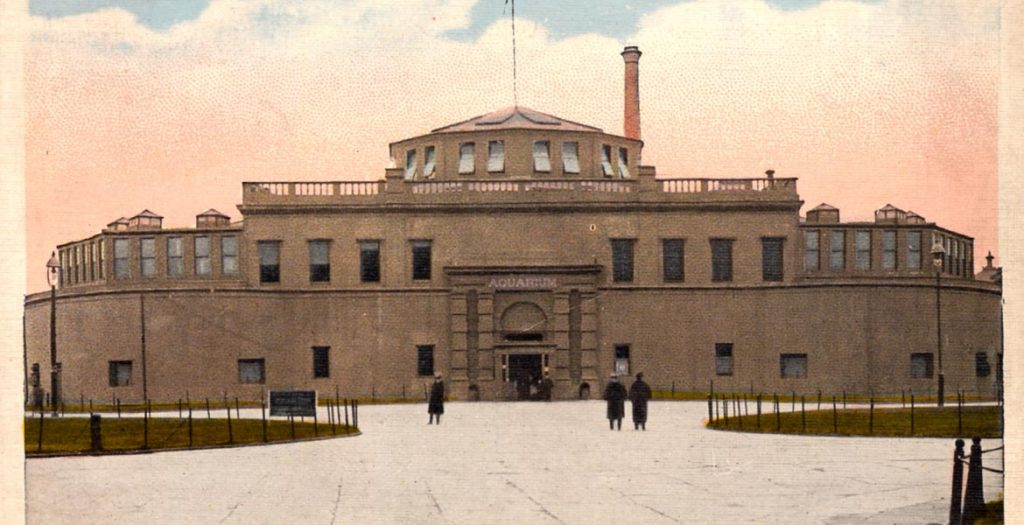 In 1824 it reopened as Castle Garden, a cultural center which housed an opera house, theater, exhibition hall, restaurant, beer garden, and rooftop promenade. After more than a quarter-century of delighting New Yorkers with art and entertainment, the Castle was converted into an immigrant landing depot run by the State of New York. By the time of its closure in 1890, over eight million people had arrived at Castle Garden to begin their new lives in America. Six years later the castle reopened as The New York Aquarium.

In 1941 the aquarium was closed to make way for the Brooklyn-Battery Tunnel. All of the castle except its historic stone walls were destroyed before the demolition was halted. In the mid-1970s the National Park Service restored the Castle to its early military appearance. Today visitors to Castle Clinton National Monument, can see and touch the old stone walls, learn about the Castle’s history through interpretive displays, and purchase tickets for ferries to Liberty and Ellis Islands.

Learn About The Castle’s Revitalization 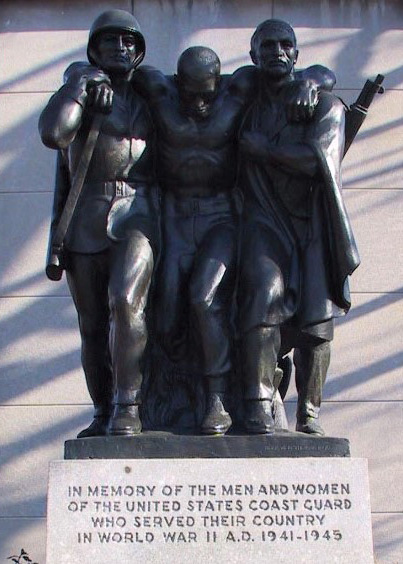 Sculpted by Norman M. Thomas in memory of the men and women of the United States Coast Guard who served their country in World War II, this memorial was installed at The Battery in 1955. Currently in restoration.

Honoring the 4,601 missing American servicemen who lost their lives in the Atlantic Ocean while engaged in combat during World War II, this memorial consists of eight massive 19-foot tall granite pylons onto which are inscribed the names, rank, service, and state of each of the deceased. On the eastern side of the plaza, a large bronze eagle grips a laurel wreath over a wave, symbolising mourning over the watery grave. The monument was commissioned by the American Battle Monuments Commission and dedicated by President John F. Kennedy on May 23, 1963. 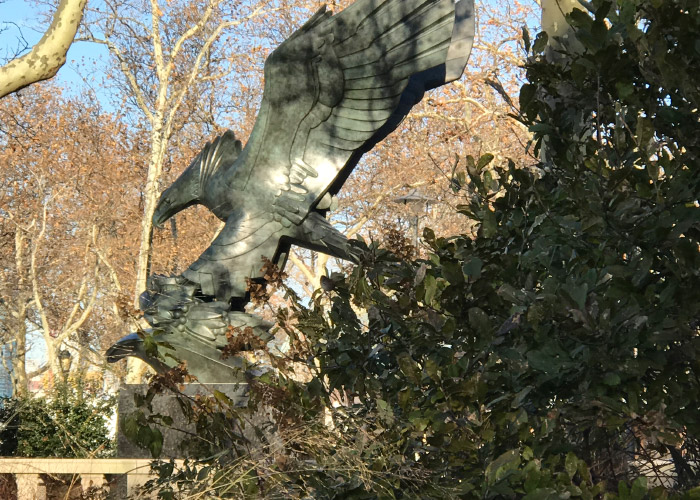 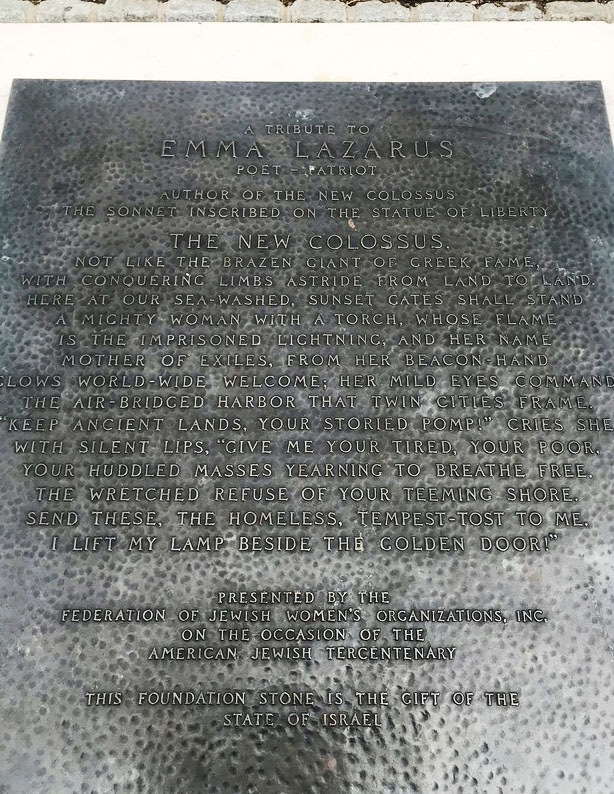 With conquering limbs astride from land to land;

Here at our sea-washed, sunset gates shall stand

A mighty woman with a torch, whose flame

Is the imprisoned lightning, and her name

Mother of Exiles. From her beacon-hand

With silent lips. “Give me your tired, your poor,

The wretched refuse of your teeming shore.

Send these, the homeless, tempest-tost to me,

I lift my lamp beside the golden door!”

This tablet marks the southwest bastion of Fort George–originally built as Fort Amsterdam by the Dutch in 1626–“as observed by Captain John Montresor and David Rittenhouse in October 1769.” The fort was demolished in 1790, after the Revolutionary War. The marker was dedicated in 1818 by the Corporation of the City of New York. 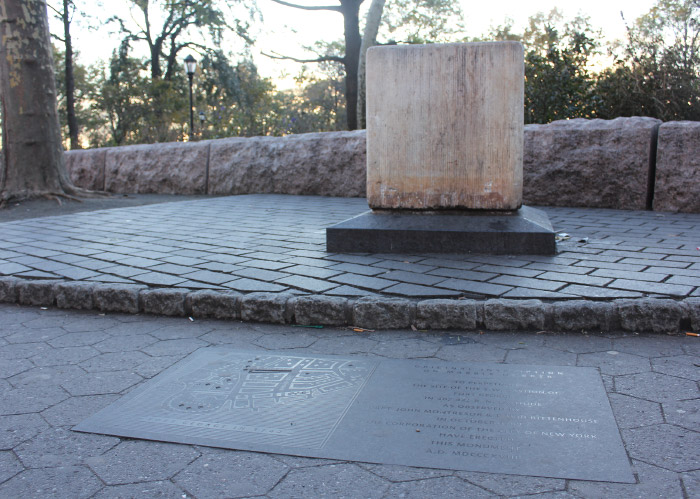 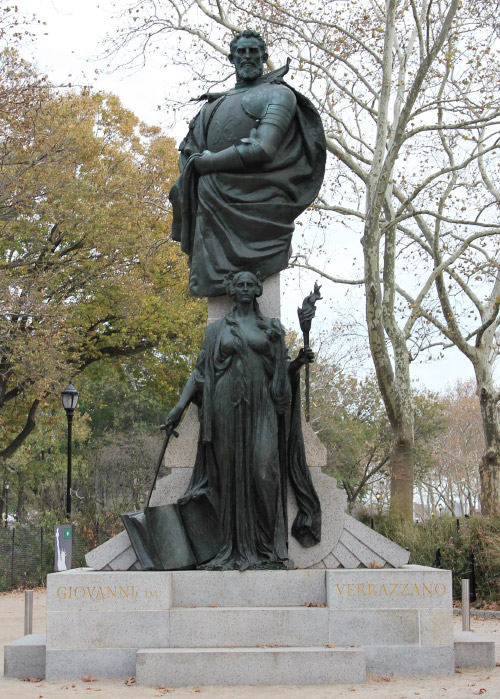 In 1524, Giovanni da Verrazzano, an Italian nobleman who sailed on behalf of the French monarchy, became the first European known to have entered New York Bay, and the first to have seen the site we now call The Battery. In 1909, the editor of the Italian language newspaper Il Progresso, Carlo Barsotti, mobilized the Italian community to contribute funds toward the creation of the statue. The heroic bronze bust of the explorer rises from an elaborate granite pedestal, above a bronze female allegorical figure representing Discovery.

This grove of fifteen cedar trees, dedicated on July 8th, 1976, was a gift from the people of Jerusalem to the people of New York City. 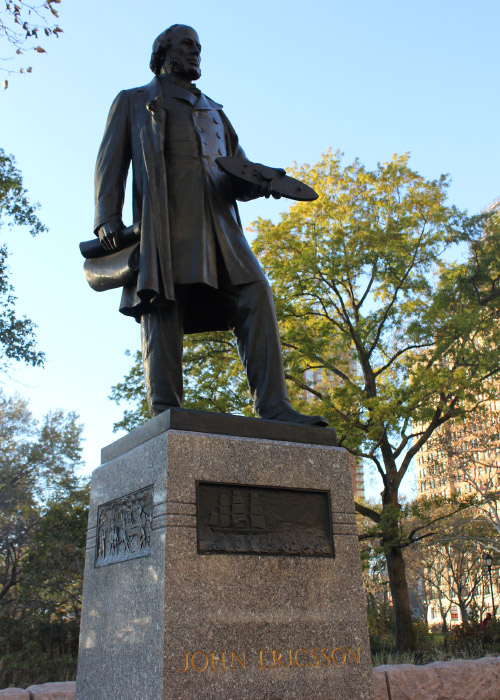 The Swedish-American engineer and inventor John Ericsson revolutionized military maritime technology with his design of the ironclad warship, the Monitor. The City of New York commissioned distinguished sculptor Jonathan Scott Hartley to commemorate Ericsson. Originally dedicated on April 26, 1893, this sculpture was remade by Hartley, and rededicated on August 1, 1903, the day after the centennial of Ericsson’s birth.

John Wolfe Ambrose, a poor boy who immigrated to New York from Ireland, rose to prominence as an engineer and developer, ultimately spearheading the deepening and widening of the channels leading into New York Harbor. The monument contains a bust of Ambrose set within a map of Lower New York Bay that highlights Ambrose Channel, and a statement that reads “his vision, scientific knowledge, and indefatigable courage aided in making New York the greatest sea port of the world.” 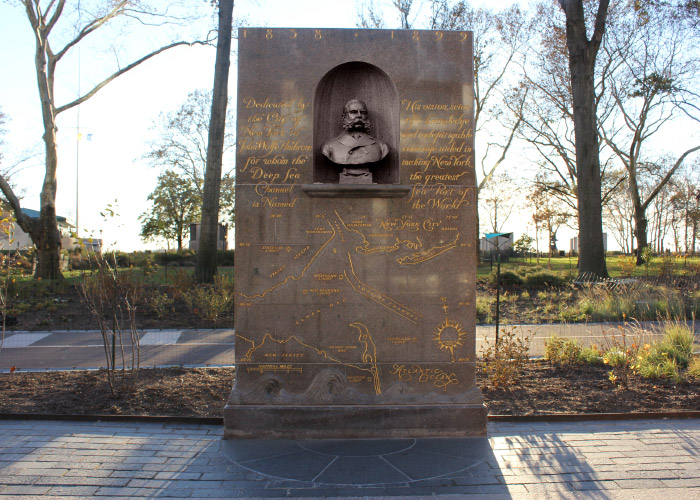 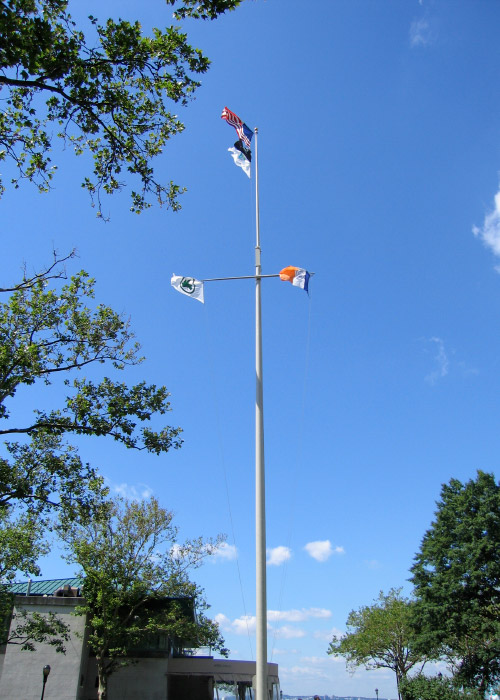 This Flagstaff, dedicated in 1955, commemorates the maritime history of The Battery.

This monumental flagstaff commemorates the Dutch establishment of New Amsterdam, the seventeenth-century European settlement which has grown into the modern metropolis of New York City. Designed by H.A. van den Eijnde, a sculptor from Haarlem in the Netherlands, the monument was dedicated in 1926 to mark the tercentenary of Dutch settlement. 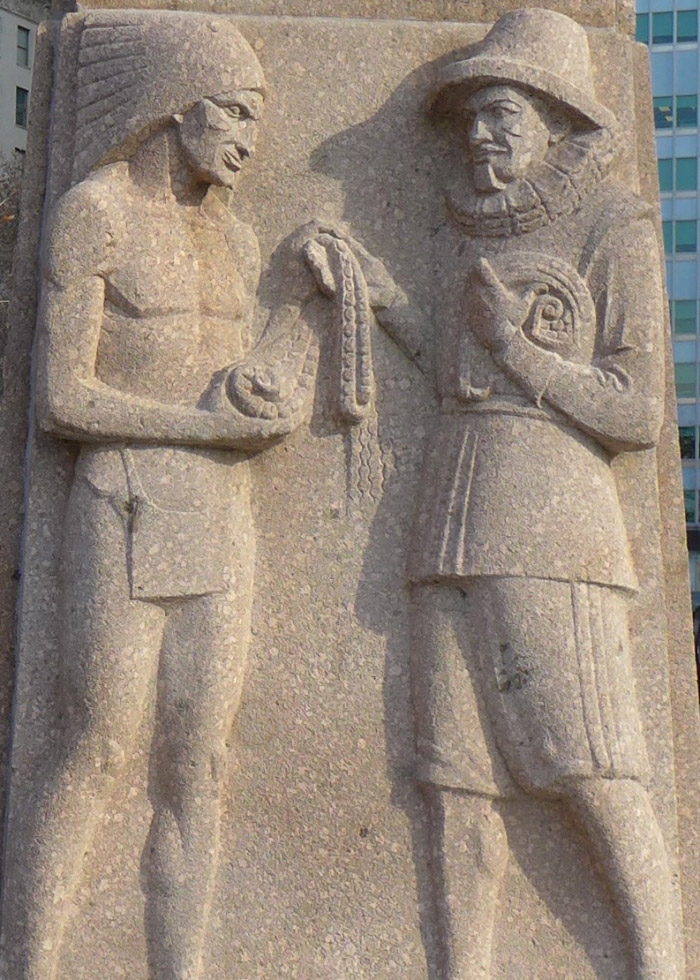 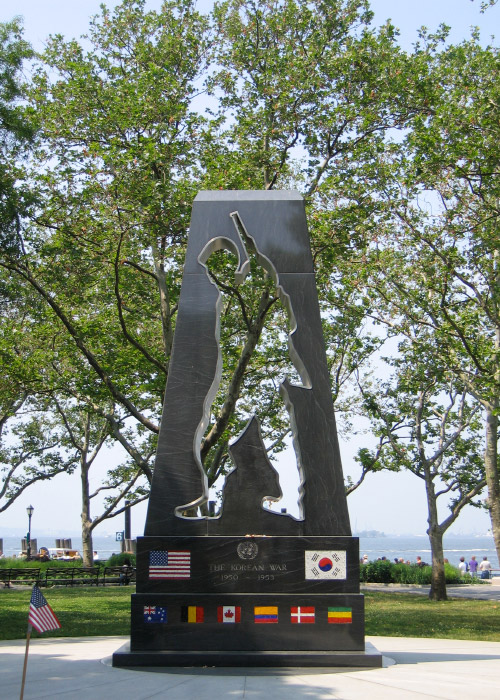 This monument honors military personnel who served in the Korean War, which began on June 25, 1950, when North Korean forces crossed the 38th parallel, and ended on July 27, 1953, when both sides signed an armistice, ending hostilities and restoring the 38th parallel as the dividing line between North and South Korea. The Korean War Veterans Memorial Committee selected Mac Adams’ design and raised funds for its construction. The form of a Korean War soldier is cut out of the center of a 15-foot-high black granite stele. Also known as “The Universal Soldier,” the figure forms a silhouette that allows viewers to see through the monument to the Statue of Liberty and Ellis Island.

This monument honors the valiant sailors of the Norwegian merchant marines and navy who lost their lives during World War II. Many of the thousands of seamen who served and died considered New York their principal port of call, and during the war used it as a home port. The monument was conceived by officers of the Royal Norwegian Navy and Merchant Marine. It was dedicated in a ceremony held on October 21, 1982, and attended by King Olav V of Norway and Mayor Edward I Koch. 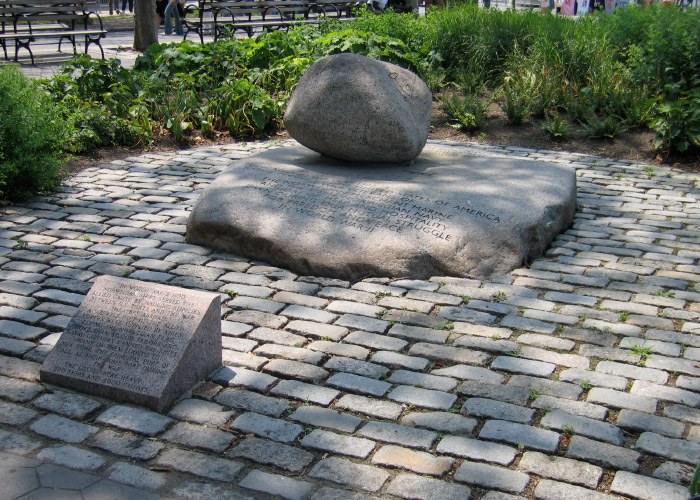 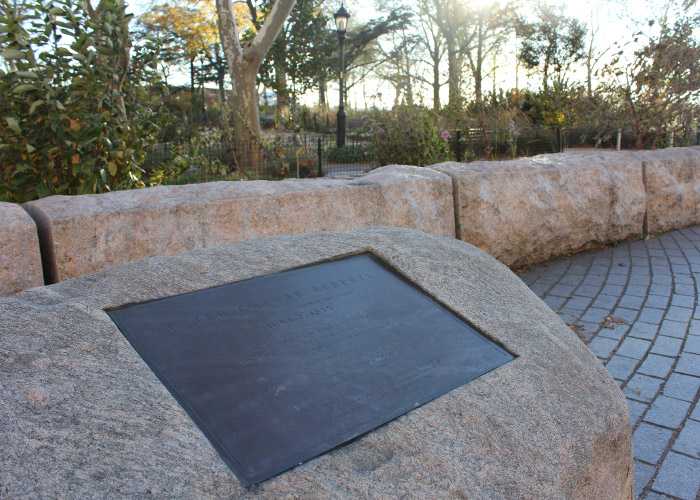 This monument was donated by the Italian Historical Society of America in honor of Peter Caesar Alberti, the first Italian settler in the area we now call New York State. Alberti, a native of Venice, landed in New York on June 2, 1635, and settled in the Wall Street area.

Founders William and Catherine Booth established The Christian Mission in London, England in 1865 to bring salvation to the poor, the hungry, the homeless, and the destitute. In 1880, Commissioner George Scott Railton, Captain Emma Westbrook, and six women soldiers set off to establish The Salvation Army in the U.S. This monument commemorates their arrival on March 10, 1880 at The Battery in New York City. 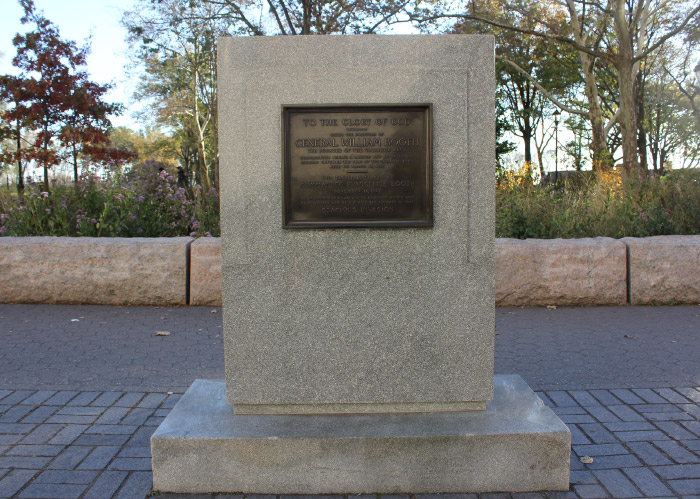 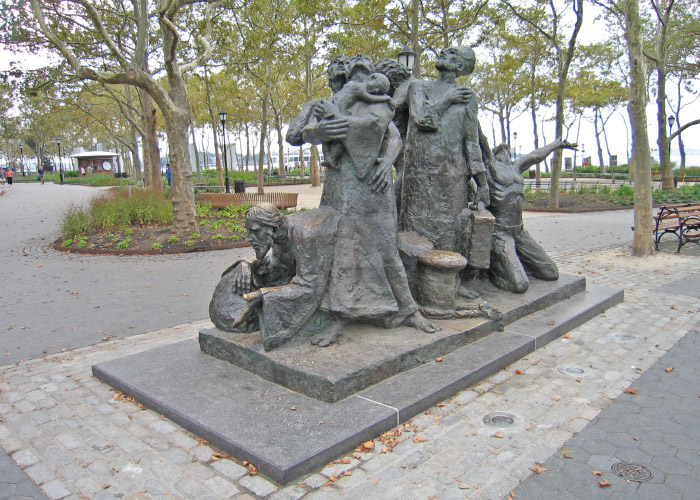 Sculptor Luis Sanguino celebrates the diversity of New York City and the struggle of immigrants in this heroic bronze figural group. The sculpture depicts figures of various ethnic groups and eras, including an Eastern European Jew, a freed African slave, a priest, and a worker. The figures’ expressive poses emphasize the struggle and toil inherent in the experience of the immigrant or dislocated person.The sculpture was donated by Samuel Rudin, who commissioned it in the early 1970s, intending it to be installed near Castle Clinton as a memorial to his parents, who, as noted on the plinth, immigrated to the United States in the late 19th century. After Rudin’s death in 1975, his family took up the campaign to install the sculpture at The Battery.

This nearly ten-foot-tall granite stele, designed by noted architect Henry Bacon, commemorates the Walloon Settlers, a group of 32 Belgian Huguenot families who joined the Dutch in 1624 on the ship Nieu Nederland (“New Netherland”) to colonize New Amsterdam. Natives of the County of Hainaut in Belgium, the Walloons had fled to nearby Holland to escape religious persecution. Unwelcome in Holland, the Walloons, led by Jesse de Forest, petitioned the Dutch West India Company to allow them to settle in the Dutch-controlled colony of New Amsterdam, which they did on May 20, 1624. The piece was dedicated May 20, 1924, the 300th anniversary of the Walloon settlers’ arrival in New York. The monument was a gift of the Conseil Provincial du Hainaut and is made of Hainaut granite, a Belgian stone. 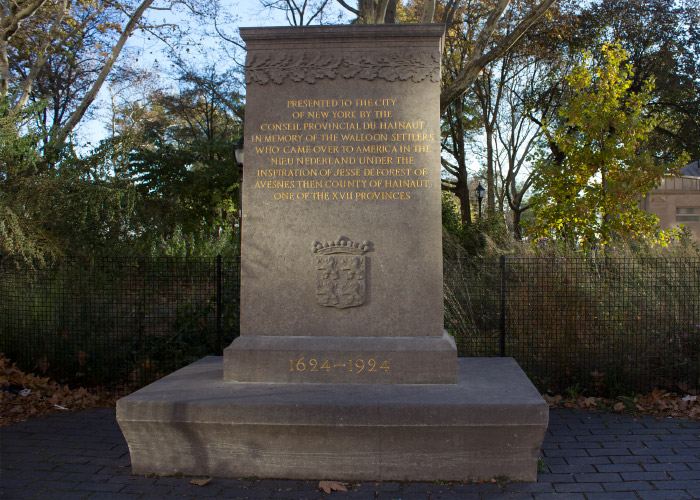 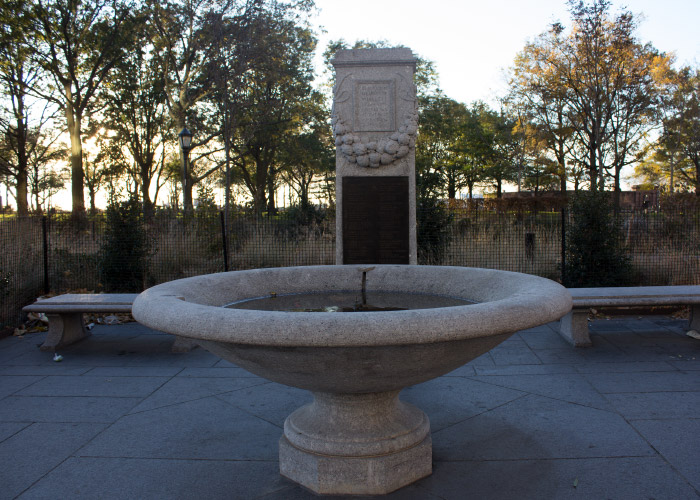 Commissioned in 1915 by public subscription under the auspices of the Wireless Operators, this monument honors those wireless operators who lost their lives at sea while performing their duties. Designed by the firm of Hewitt and Bottomley, the monument consists of an upright granite cenotaph decorated with a carved swag of seashells and foliage and inscribed with the names of the deceased, as well as a granite display fountain and two benches. Additional bronze markers naming those who have perished since the monument’s dedication on May 12, 1915 have been added by the Veteran Wireless Operators Association. The first name inscribed in the granite is that of Jack Phillips, the radio operator aboard the R.M.S. Titanic when it sank on April 15, 1912. 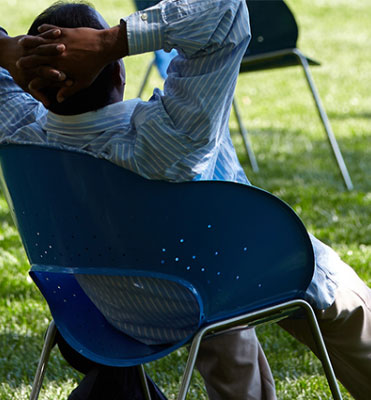 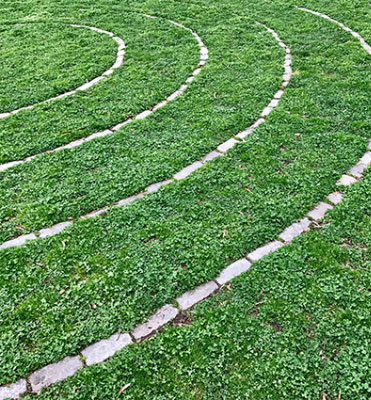 A meditative walk created by The Battery Conservancy to commemorate the first anniversary of 9/11. 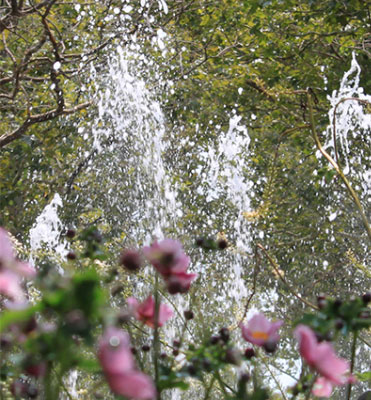 Cool off with 35 jets of water in the 60-foot-wide spiral fountain.